True Blood fans were given “An Invitation to the Set” video on Sunday night. Waiting for the new season has been quite torturous and the video help whet the appetites of fans. I took a second (ok third ) look at a few of the images from that video and noticed a few potential “spoilers”/clues for what we may see in the upcoming season. Definite SPOILER ALERT!!!!!

The second image below shows Eric Northman looking as fierce as always and it looked like he was perhaps dealing with a certain witch. The doorway behind Eric looked very familiar to me and made me wonder just why is he there? When I saw the video I thought I heard or saw Marnie’s character for a split second. Perhaps this is right before a certain big bad spell? Yes the door way is indeed to the “Moon Goddess Emporium” location that is shown early on in the video (Lafayette and Jesus are seen walking in with the people in a circle-Holly and Marnie can be seen there). UPDATE: The scene where Lafayette and Jesus walk into Moon Goddess Emporium must be for episode 4.1–The lady to the right of Jesus looks like the character of Daisy (from the casting call for episode 4.1) There is a quick image of Marnie right before Eric Northman appears in the doorway so I am pretty sure this action take place at the Moon Goddess Emporium.

This image flashes right before Eric's image appears in the video

Eric Northman -looks like he is encountering a certain witch? (the doorway behind him looks much like the one in Moon Goddess Emporium) 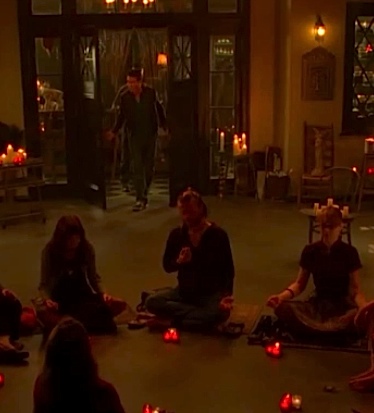 Jesus and Lafayette walking into "Moon and Goddess" note the door 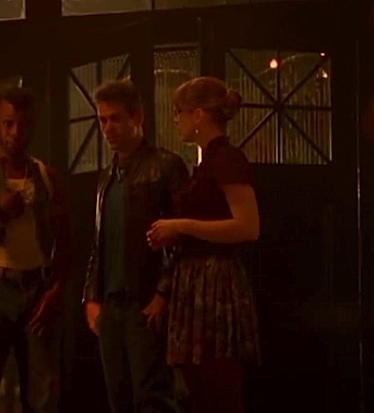 Close up on the door behind Jesus at the Moon Goddess Emporium UPDATED--Looks like Daisy from casting call for ep.4.1 is to his right!

Not that I’m just focusing on Eric Northman in this video but the jacket /outfit he is wearing in the Invitation to the set video is the same one from the “Waiting Sucks video 4”  which features  Bill and Eric. They are shown speaking in Bill’s office and Bill mentions how there is a new coven and how powerful they are and what they can do with that power. Perhaps Eric goes straight from Bill’s office to the Moon Goddess Emporium? Could Bill Compton be setting up Mr. Northman as payback for revealing his dark secrets to Sookie?? (all just conjecture on my part) Just too coincidental that Bill mentions the witch problem and then we see Eric there dealing with them directly? The invitation to the set video shows us more of that conversation from the Waiting Sucks video 4 we were given earlier. The image below shows more of Bill’s office (and the two vampires in a bit of a standoff?)

screen cap from Invitation to the Set video -appears to be more of the action from Waiting Sucks vid 4-featuring Bill and Eric in Bill's office.

The screen caps below are from the Waiting Sucks video 4 : Bill .

Another interesting item I noted was the dress Anna Paquin/Sookie Stackhouse was wearing in this video. She is shown speaking to Bill Compton in this screen cap:

Sookie speaking to Bill Compton on her porch perhaps. Note the dress

The dress from the invitation to the set video (image shown above) looks a lot like the one Sookie is shown wearing in the season 3 finale. Image below-this action is from when Sookie finds out Bill’s real purpose for being in Bon Temps. Does the action in the Season 4 Invitation to the set video take place perhaps soon after that revelation ? (Bill’s invitation to her home was rescinded in the Season 3 finale.) Perhaps that is why they are speaking on her porch. I just found it odd that she is shown wearing the same dress. 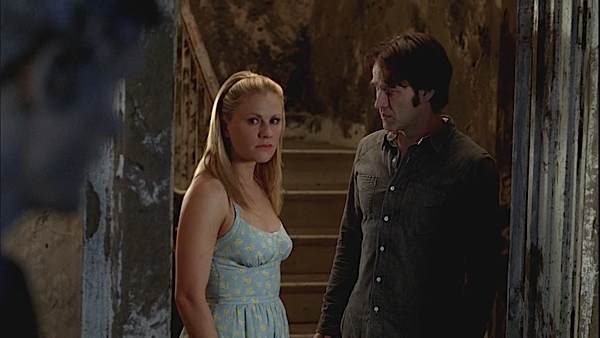 Another interesting tid bit I noticed from the video was the look of apprehension in Jesus’ face when he is in the circle with the others at Mood Goddess Emporium. Was he upset that Lafayette was the first one called over to join them? Or is his apprehension due to not trusting Marnie and the outcome in their particpation in the ceremony? Even Holly seems to be unsure of this additional element to their group.

Jesus looks worried to be taking part in this ceremony/(perhaps a seance?)

Lafayette pointing to himself as if to ask..Who me??

I’d love to hear from other fans if they see what I see in these videos or maybe I’m just suffering from Waiting Suckitis..(Where everything looks like a spoiler since I just want the season to be here NOW). Part 2 of the deeper clues will be posted tomorrow. Yes I see more little clues.

All of the screen caps for the Invitation to the set video can be found on this site link here: (under the Screen caps heading)

The screen caps for the “Waiting Sucks videos” are organized by video and can be found here: