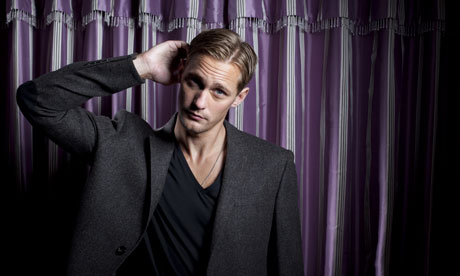 Alexander Skarsgard was recently interviewed by Imogene Carter of the Guardian UK news site. The interview is below:

Alexander Skarsgård is describing the challenge of wearing fangs: “I had to practise hard, they’re pretty big! In the beginning, it was difficult because you have a lisp. The fangs come out when you’re angry, excited, aroused, so it’s tough, when you want to look menacing…” Suddenly, he bares his teeth at me, momentarily assuming the trademark snarl and glacial stare of Eric Northman, the 1,000-year-old Viking vampire the Swedish actor plays in HBO’s hit TV series True Blood. “Again!” I want to shout, briefly transported into the show’s hedonistic world, “do it again.”

Thankfully I don’t. While friendly, Skarsgård oozes composure and professionalism, his sharp suit and slick hair befitting the London hotel where we’ve met. He’s almost as ice cool in person as his two most famous characters to date: Sergeant Brad “Iceman” Colbert in Generation Kill, the HBO mini-series about the US invasion of Iraq, and Eric in True Blood, currently into its second series on Channel 4.

Skarsgård was keen to work on True Blood before even seeing a script. “When my agents told me about it, I said, ‘Viking vampire? What is this, Conan the Barbarian?’ But then they said Alan Ball [the Oscar-winning screenwriter of Six Feet Under and American Beauty] was the creator of the show and I’m a big fan of his work. He’s so smart.”

The resulting show, set in Louisiana, didn’t disappoint, “It’s intelligent, but structured like a soap opera.” It’s also so lusty and bloodthirsty that for September’s cover of Rolling Stone Skarsgård and his co-stars were shot naked, dripping in fake blood. Does the sex and nudity ever bother him? “Not at all,” he says, no doubt delighting his legions of fans. “I’m with friends and every time we get naked on the show, it makes sense. It’s wild and crazy and fun.”

The eldest son of Swedish actor Stellan Skarsgård, Alexander, 34, was raised in Stockholm but has lived all over, including a stint in Leeds, aged 20 (“a blast”). Now a hot property in Hollywood, we’ll be seeing much more of him, with forthcoming roles in the big-budget movie Battleship and with his father in Lars von Trier’s Melancholia.

But despite the glamour and the jetsetting, Skarsgård is homesick. “I went out for a walk last night here in London. It was all wet streets, the smell, I miss that. I have a great life in LA, but we don’t have the crisp air you have in October in London or Stockholm, the colour of the trees.” It seems beneath the cool exterior and the fangs, Skarsgård’s actually just a softy at heart.

One thought on “Guardian UK Interview of Alexander Skarsgard”