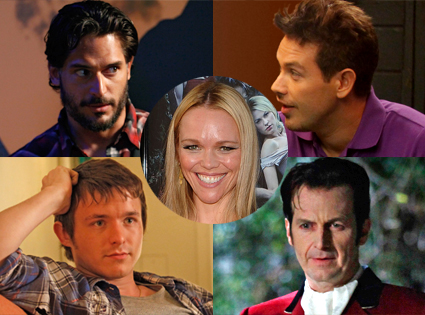 Kristin Dos Santos of Eonline was able to get some spoilers about True Blood  season 4. Just who will be back for season 4. Below is an excerpt from the article.

Oh wait, you knew that already?

Well, how about  Bon Temps’ other new additions—Denis O’Hare, Marshall Allman, Kevin Alejandro and Lauren Bowles? We have the scoop:

Believe it or not (and after last week’s, um, sunny episode ending, we were inclined to go with the not), all of the aforementioned newbies will be back on True Blood for season four, according to sources. So it looks like all those pretty faces up there survive next Sunday’s “bloody” (per Alexander Skarsgård) season three finale—even the (gulp) spine-snatchin’ King of Mississippi, Russell Edgington. (Hide yer babies!)

Dennis is set to return to the HBO hit next year, according to sources, but don’t expect to see Russell too early in the year. We have it on good authority (Alan Ball‘s) that initially witches will reign supreme, but I’m told the plan is for Russell to reappear later in the season.

As for Lafayette’s lover, Jesus (Kevin Alejandro), Nelsan tells me, “We’re partners in crime now, my boy toy, so he will be back.” Adds Kevin with a knowing grin: “I’m hearing rumors about that, too. I’ve never been a part of anything this big before.”