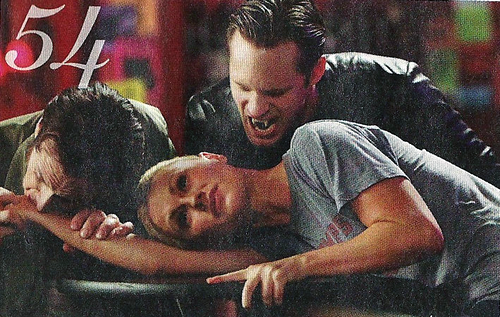 The image above has not been verified but it does raise quite a few questions. In the upcoming episode description for True Blood 3.10- Eric tempts Russell with the ultimate vampire dream. The image above may very well be for the next episode. If by drinking Sookie’s blood a vampire is able to become a “day walker” that could very well be a vampire dream. It may be valid since there were prior spoiler images rumoured to be from the season 3 finale released showing Sookie, Eric (with visible burns on face) and another actor with a very “charred face” makeup appearance in the photos. Image shown below.

For episode 3.12 the summary states that Eric grapples with his conscience  while plotting his perfect revenge against Russell. Fed up  with being vampire crack Sookie reconsiders a life with out Bill or any other vampires. Another recent news item states that Eric covered in blood as is Pam are in Fangtasia’s and another vampire is in the corner with a badly burned face tied up in silver (next to a glass goblet with the remnants of another vampire “goo” remains).  The chained up vampire could be Russell since it seems he goes nowhere without his Talbot in gooform. It also states that Sookie has blood marks on her wrist (a lot like the photo above where it looks like Russell is taking a bite) But no mention of Sookie having bite marks on her neck so in the photo above it is misleading fans to think that Eric also takes a bite.

The gallery below contains more of the spoiler images. NOTE the appearance of a certain maker sitting next to Eric!