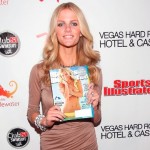 Brooklyn Decker has been set by Peter Berg as a female lead for his film “Battleship”. She joins Alexander Skarsgard, Taylor Kitsch and Rihanna in the film. The film is due to start production in September in Hawaii. It  is scheduled to be released May 18, 2012. Scripted by Jon Hoeber and Erich Hoeber,  Battleship’s a big scale action adventure that pits that crew of a battleship again alien invaders. Brian Koppelman and David Levien are working on the most recent draft.  Decker plays the love interest of Kitsch’s naval officer character and was just in Hawaii filming the Denis Dugan-directed comedy Just Go With It for Sony Pictures.  Berg and his Film 44 partner Sarah Aubrey are producing with Hasbro’s Brian Goldner and Bennett Schneir and Scott Stuber.